Why Chloroplasts? Biotech crops were first launched in the 1990’s and have revolutionized agriculture; however, insects and weeds are developing resistance to first generation biotech traits.  The underlying trait delivery technology used to create biotech crops is outdated and unable to support the creation of the next generation of powerful crop traits.  Crops of the future need dozens of traits to improve yields, protect against pests and diseases and provide improved nutrition to feed a growing population.  Delivering traits in the chloroplast provides solutions to many of the problems with current trait delivery technology. 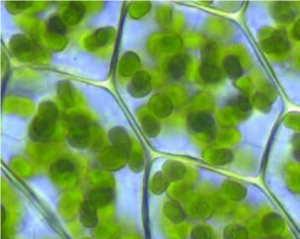 in a different way than those in the nucleus. The nuclear traits are inherited by both pollen and seed. Chloroplast traits are inherited in the seed alone, reducing the breeding process to one cross versus the numerous crosses required for integration of nuclear traits.  Breeding with chloroplast engineered traits saves time and money in product development and seed production, thus speeding up time to market.

More Powerful Traits: Expression of traits in the chloroplast results in a higher dose, making the trait more effective and helping to fend off development of resistance of insects or weeds.  The high dosage attribute of Plastomics’ technology will benefit current products but will also enable the commercial deployment of new modes of action, such as RNAi.  Plastomics has demonstrated effective trait dosing of RNAi to control lepidopteran pests.

Easy Trait Stacking: Stacking multiple traits in the nucleus is a complex and expensive process.  Plastomics’ gene delivery technology utilizes a precise and natural process in the chloroplast to easily stack traits, saving time and money.  Stacking traits gives farmers more tools to address the challenges they are facing such as insect and weed resistance and the need for increased yields.

Trait Containment: Chloroplasts are maternally inherited, meaning that traits are sequestered in the seed and will never be transmitted by pollen.  This eliminates the environmental and regulatory concerns of biotech traits in some crops, which will open up new market opportunities in crops like sorghum, rice and sunflower.